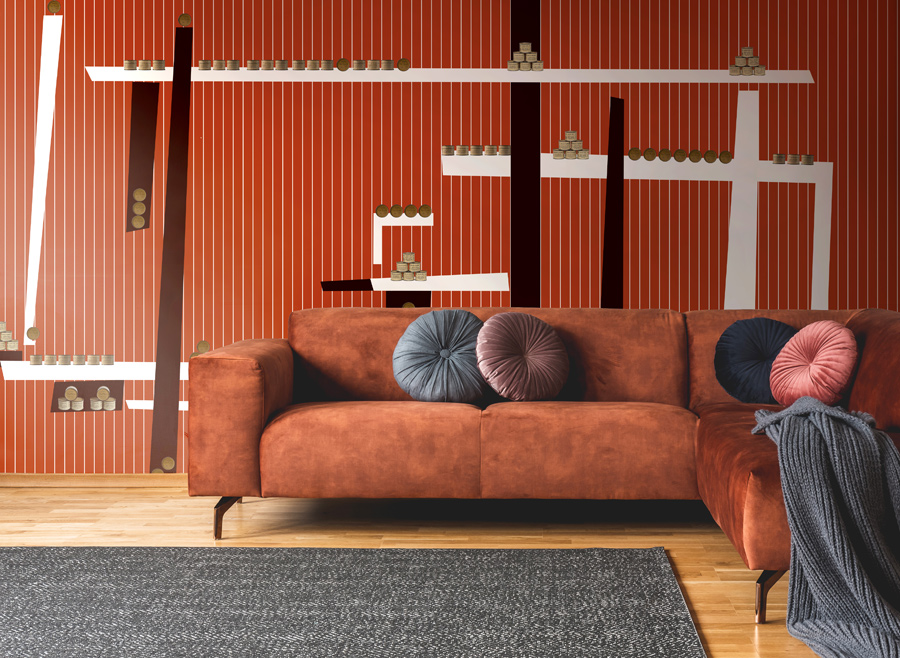 TAPLAB Wall Covering in collaboration with the Piero Manzoni Foundation
presents the new 8PER collection, homage and tribute to the famous Artist’s Shit (1961) who turns sixty.

The new wall covering collection, consisting of 8 different graphic proposals, will be previewed at the Ca degli Artisti in Milan. The occasion is an exhibition dedicated to this piece realized by Piero Manzoni, known all over the world for its ironic and irreverent message.

TAPLAB Wall Covering has always been linked by a very thin thread to the world of art and its multiple representations. To celebrate this significant anniversary, the company has created a specific wallpaper collection1, made of vinyl material and inspired by one of the most famous works by Piero Manzoni. This brilliant artist chose to provoke more than to please a society that was ‘dozing’ in the shadow of its own certainties, even in the field of art.
Today this art operation by Piero Manzoni is declined by TAPLAB Wall Covering in a wallpapers collection that stands out for its ironic and fresh look. 8PER consists of 8 different decorations that reproduce, among various colors and original perspective games, the leitmotif of the infamous box of which the TAPLAB Wall Covering project shares not only the irony, but also the deep idea.

The suggested colors go from bright tones to more pastel ones. Combined according to the precepts of a lively but elegant taste, they define a scenario suspended between geometric and surrealistic representation.
The great know-how that marks the TAPLAB Wall Covering production allowed to define a collection that expresses quality and aesthetic originality. It’s addressed to everyone who prefers living spaces characterized by an original and contemporary sign.

Artist’s Shit 1961-2021: the box and teh dedicated wallcoverings on display at the Casa degli Artisti Genesis of the project

In May 1961 Piero Manzoni (1933-1963) created 90 boxes with the title printed in four languages: Merda d’artista, Künsterscheisse, Merde d’artiste, Artist’s shit pricing it at the equivalent weight in gold (30 grams). Sixty years have passed since then, but this work is still an surprising and scandalous object, that causes curiosity and adoration. It is certainly Manzoni’s most famous work of art: it has been cited in songs and music videos, it’s the protagonist of many books and films and various other artists dedicated tributes to this piece in different materials and sizes, even if it has not been fully and deeply understood yet.
Among the many initiatives Piero Manzoni Foundation promoted for this anniversary, the “8PER / Tribute to Artist’s Shit by Piero Manzoni” project realized in collaboration with TAPLAB Wall Covering to create an ad hoc series of wallpapers.
The eight wallpapers will be presented at the Casa degli Artisti from 13 to 30 May 2021 as part of the Arte & Impresa project, which aims to bring the world of art out of its own fields and make itself available in the construction of the world even the businesses one. The encounter between two living forces, that accept the challenge of going beyond their usual perimeters and this way meet and generate new ideas and opportunities.

The set-up is got by Arch. Valer Palmieri, who took care of the great Piero Manzoni exhibition at Palazzo Reale in 2014 (curated by Flaminio Gualdoni and Rosalia Pasqualino di Marineo), and will also host one of the 90 original boxes.
The new book published by Carlo Cambi Editore in collaboration with the artist’s Foundation, will be presented shortly. It will be entirely dedicated to the Artist’s Shit and written in four languages and combined with four essays (Luca Bochicchio, Flaminio Gualdoni, Rosalia Pasqualino di Marineo and Marco Senaldi).